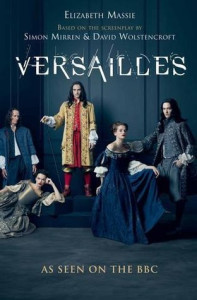 Synopsis: You’ve seen the BBC 2 series, now read the novel based on the TV show. Don’t miss VERSAILLES the most sexy and shocking drama ever written about the king who built the world’s most famous palace. Packed with sex, scandal and intrigue, VERSAILLES will keep you up all night.

1667. The civil wars are over and King Louis XIV is on the French throne. To keep the nobles from their plots to overthrow his crown, the King gathers the court at Versailles. He plans to keep them there under his scrutiny by building the greatest palace the world has ever seen. The Palace of Versailles will be an opulent prison where Louis’ power is absolute.

The nobles have no choice but to play Louis’ game of manipulation and treachery. As tensions rise the court becomes a battlefield of tactical liaisons and salacious passions. Versailles is not the paradise it appears to be; instead, it is a labyrinth of treason and secrets, of political schemes and deadly conspiracies. It is a place of passion and death, love and vengeance.

The King will take what is rightfully his. [source]


Note: This post is for discussion of the book, so please be advised that there may be spoilers in the comments. As a reminder, LJ's spoiler code will work in comments and while it is not required to use when commenting, it is something that can be utilized to hide spoilers. (relevant LJ FAQ)