We had five people voting in the third round! And the comments in that entry are now unscreened, so that everyone can see what all was voted for. And to also double check my tallying, lol.

The top vote getters were:

The five categories that had three votes each are:

Script/Screenplay
Blind Book (pick a random free ebook, or possibly even letting a random generator pick a book from your TBR list)
Set on or near a holiday
TV tie-in/turned into a tv show
Humor/Satire

I numbered the categories 1-5 in the above order and then had the randomizer give me a number. Here's the result: 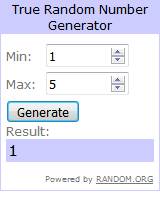 So, "script/screenplay" makes the card!

I then numbered the categories 1-4 in the above order (Blind Book being #1 and Humor/Satire being #4) and then had the randomizer give me a number. Here's the result: 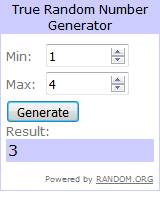 So that means "TV tie-in/Turned into a tv show" makes the card!

These six categories will make up the next six squares on the board.

Fourth and final round voting post will open shortly! Thanks to everyone who voted in the third round!

As with the previous three rounds, please vote for 10 of the remaining categories. After a week or so, I'll tally the votes and the 6 categories that have the most votes will be the final six categories to make it onto the card.

I'd like for us to choose six categories per week through the month of December.

(Please see this post for more info on vote totals and other info.)

Comments will be screened until time to tally the votes.

(Some of these I tweaked the wording on, but these are all the ones suggested)